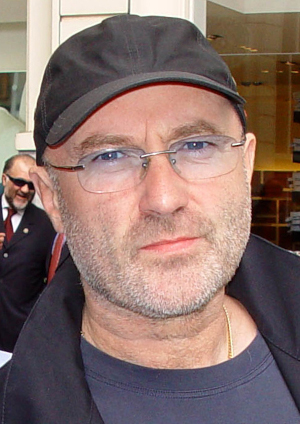 Rock musicians generally win more praise for their riffs and melodies than their lyrics. Everyone loves Jimmy Page’s screaming guitar solo from “Stairway to Heaven,” while no one can explain that bustle in the hedgerow. True, Bob Dylan was a poet at heart – if you can make out the words through the mumbling. But Steely Dan decided that since everyone else was singing love songs, they could sing about eating dumplings after a coke deal. And for sheer lyrical inscrutability, it’s hard to top Phil Collins and Genesis. “Paperlate.” “Sussudio.” “Abacab.” Admit it, you have no clue what any of those songs were about.

Of course, meaningless lyrics have never been a barrier to musical success. (See, e.g., The Kingsmen, “Louie Louie.”) Now Phil Collins and his Genesis bandmates Mike Rutherford and Tony Banks have reached the zenith of rock success. I’m not talking about Cleveland’s Rock & Roll Hall of Fame – they achieved that honor back in 2010. No, last week, they announced that they had joined an even more elite club of icons, including Dylan, Bruce Springsteen, and David Bowie. How did they do it? By selling a bundle of publishing copyrights, music income streams, and recording masters to Concord Music Group for north of $300 million.

Collins was already rich enough that he could give the state of Texas his $15 million collection of Alamo memorabilia. (“Take me home,” indeed.) The sale gives the musicians enough money to spend the rest of their days in paradise. And it does more than just put cash in their pocket today. Against all odds, it takes a sledgehammer to the IRS. What’s in the air tonight? Tax savings!

Hit machines like Genesis keep churning out millions in royalties from their music long after they give up recording and touring. Those royalties are taxed as ordinary income at rates up to 37%. Clever planners (like us!) can use all sorts of tasty licks to minimize those taxes. These include S corporations and other entity structures that avoid employment tax, qualified retirement plans, charitable entities, and special purpose business entities.

Selling rights to those future royalties converts them from ordinary income into lump sum capital gains, taxed at no more than 20%. And it opens doors to all sorts of powerful strategies to defer or even eliminate tax on those gains. These include charitable trusts, various forms of installment sales, and even qualified opportunity zone investments. (Having said that, recognizing those gains today eliminates the chance to pass them tax-free to heirs. But we can fix that problem, too.)

You might think that selling music rights just transfers future taxes on that income to the new buyer. But as it turns out, the IRS has even more reason to regret last week’s deal. That’s because the new owner, Concord Music Group, is owned primarily by the tax-free Michigan State Retirement System. Concord has spent decades assembling a catalog of over 400,000 songs from artists like Paul McCartney, Creedence Clearwater Revival, Santana, and Miles Davis. Every time you listen, you’re making tax-free money for 530,000 Michigan teachers, judges, cops, and bureaucrats.

Were you in a band in high school or college? Do you still get together today to jam with family or friends? Your dreams of headlining stadium tours may have faded like your prize collection of concert t-shirts. But you don’t need a miracle to pay less tax because we can help you leave the IRS with no reply at all. Even better, you won’t need to use your savings to pay for trashing hotel rooms!